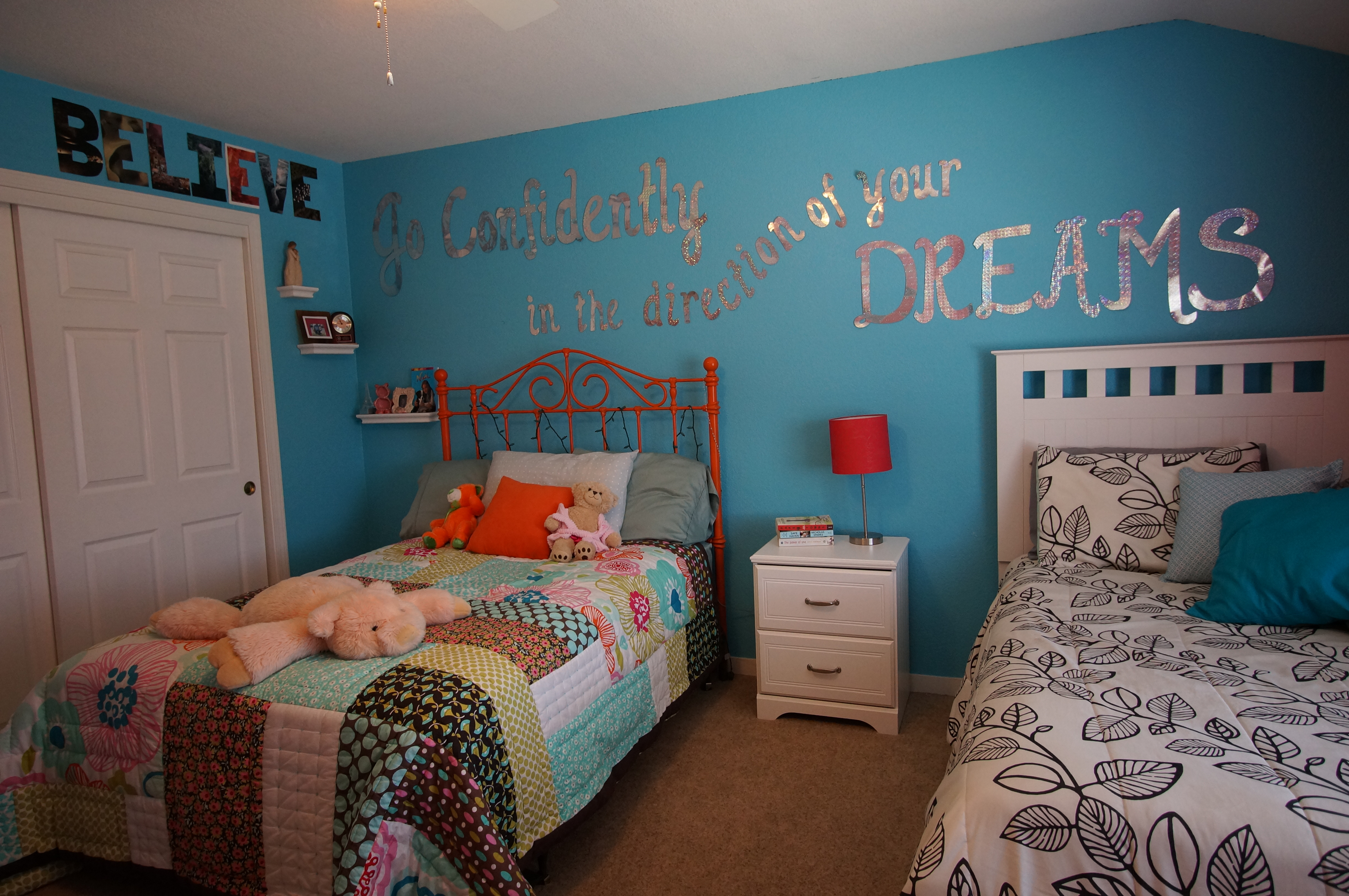 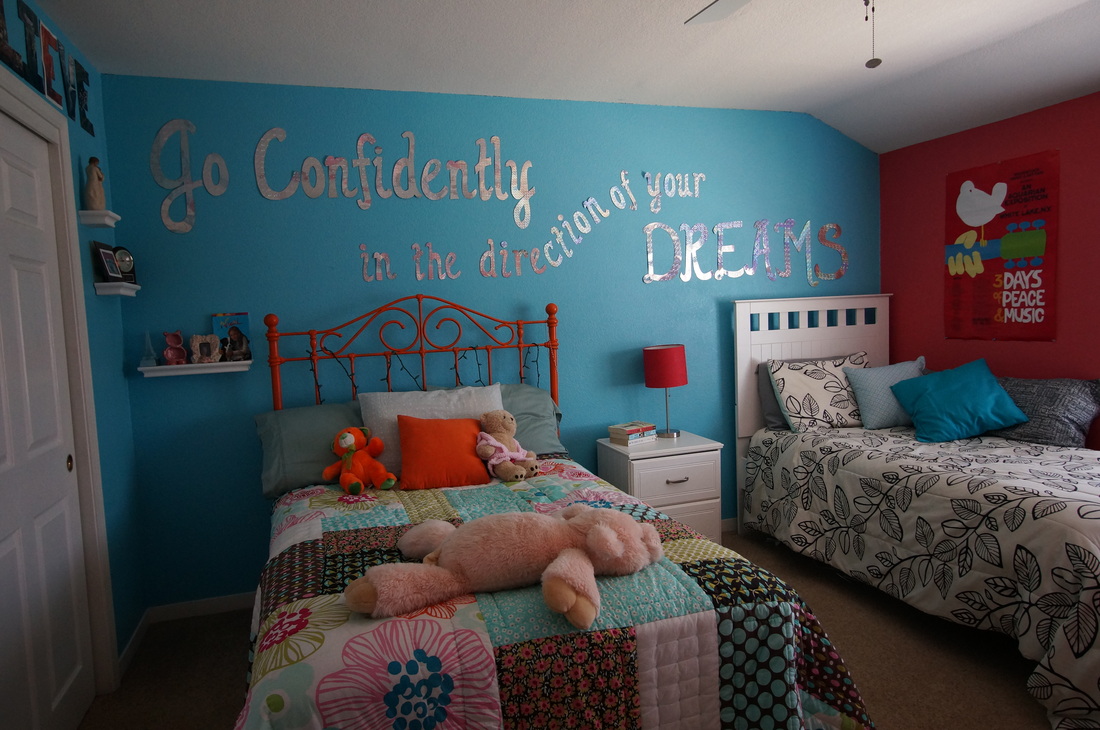 Sometimes our upstairs feels like a dorm.  With six kids sharing (albeit on a variety of differing schedules) three bedrooms it can be a bit chaotic.  When we first moved in together, my husband and I had a lot of discussion on how we were going to arrange the sleeping quarters of the four girls.  The boys were a given.  But with the girls, would they share with their biological or with their family name sake?  Or with their step?  The one closest in age?  We were being cautious, but in the end we most definitely were overthinking this blending of our families. The two middle daughters (step-sisters) walked in the house, ran through the rooms and declared that they were going to share the “blue” room.  The room was painted with a navy blue wall. OK, but does the 20 year-old want to share with a 10 year-old? Sister negotiations set in, and they worked it out themselves.  Nicole and Olivia took the blue room, and Alyssa and Sophia took the room with the walk-in closet.  Each daughter is sharing with a step-sister.Then it came to decorating and meshing styles.  Each daughter got to pick out a paint color, and I started painting.  Nicole and Olivia decided on turquoise and coral. They had envisioned their bedroom walls covered in quotes and started a collection of quotes and photos on tumbler.  When I was done painting they planned, and designed, and collected quotes, and planned, and planned, and planned.  And planned some more.  After a year of them planning, I took it into my own hands. 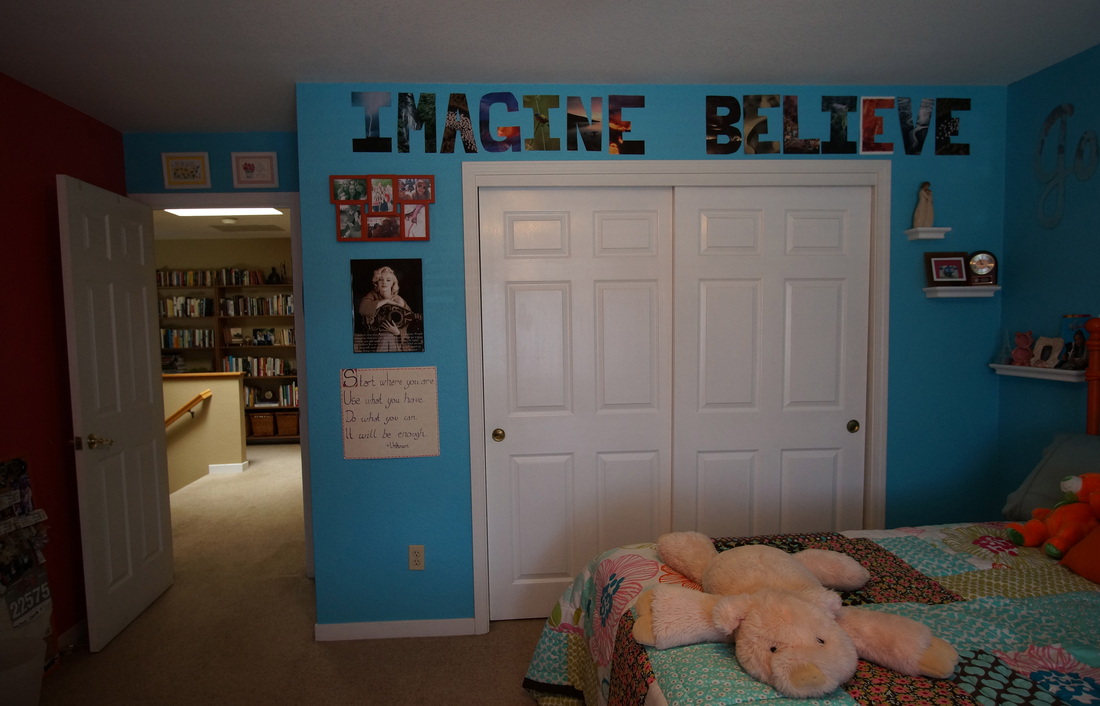 Now I am really a hands-off my kids rooms unless they ask me to help.  I believe it is their room, and they can set it up the way they want.  But these two were not getting anywhere, and they seemed to want to get something done.  Part of the problem was scheduling.  Our kids have busy schedules and they split their time between two homes,  So one day last summer, the house was quiet – all the kids were gone, and I got a bug to decorate.Since I knew it would probably not be met with great enthusiasm – I was super frugal with my supplies. Paper, pencil, scissors, tape, a stack of National Geographics, and two pictures from Home Goods.I knew the girls’ general feelings of quotes that they were thinking of, and with this in mind I settled on the quote, “Go Confidently in the direction of your DREAMS”. I had a stack of shimmery silver sticker paper.  It actually has a sticky side, but I choose not to remove the backing.  I choose to tape up the letters with painters tape.  It is all really easy to remove!I found a font online that I freehand drew onto large butcher paper.  I first drew all of the letters on the butcher paper and cut them out to make a template.  I used the template in revers to trace onto the back of the silver paper.  I did it this way so that I would not be leaving any drawn lines on the front o the silvery paper. Essentially I drew and cut out each letter twice.  This took me longer than I had anticipated, but the entire project was done in a day.  I laid the letters out on the floor to help ensure even sizing.

Scrolling through Tumbler I found words made up of letters cut out of magazines.  I have a stack of old National Geographics, and I thought their full page pictures would be perfect for this.  Cutting out these letters went quickly. I cut out, “Imagine” and “Believe”.  I taped these two words above their closet. 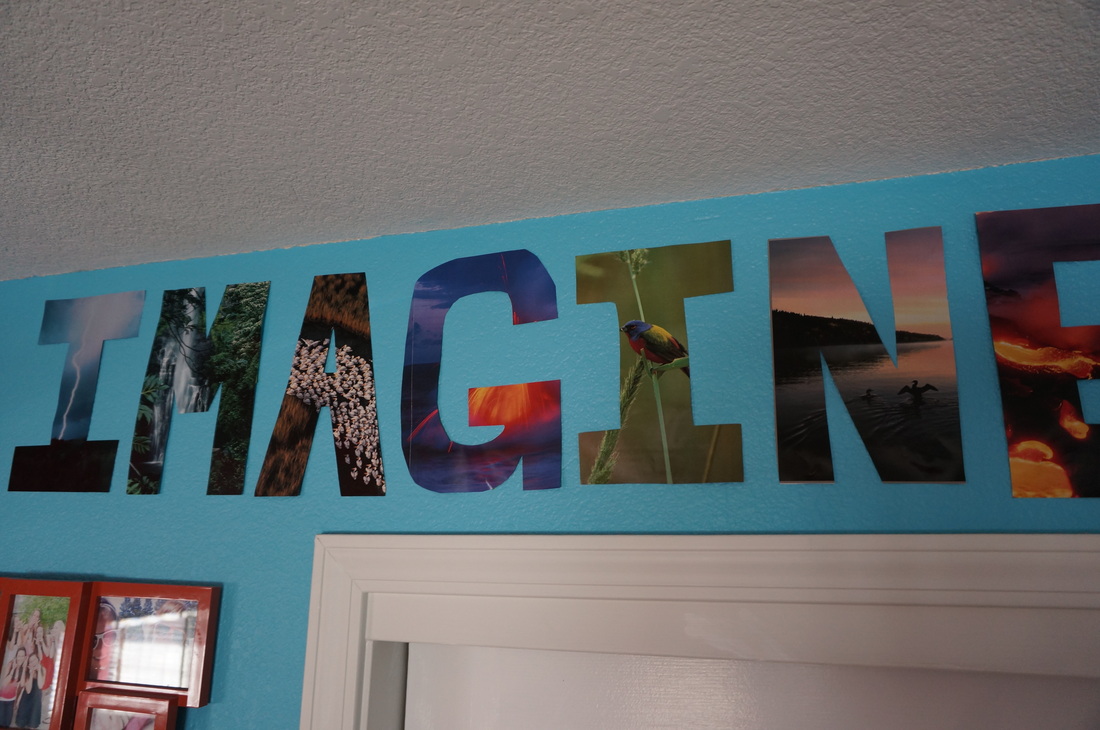 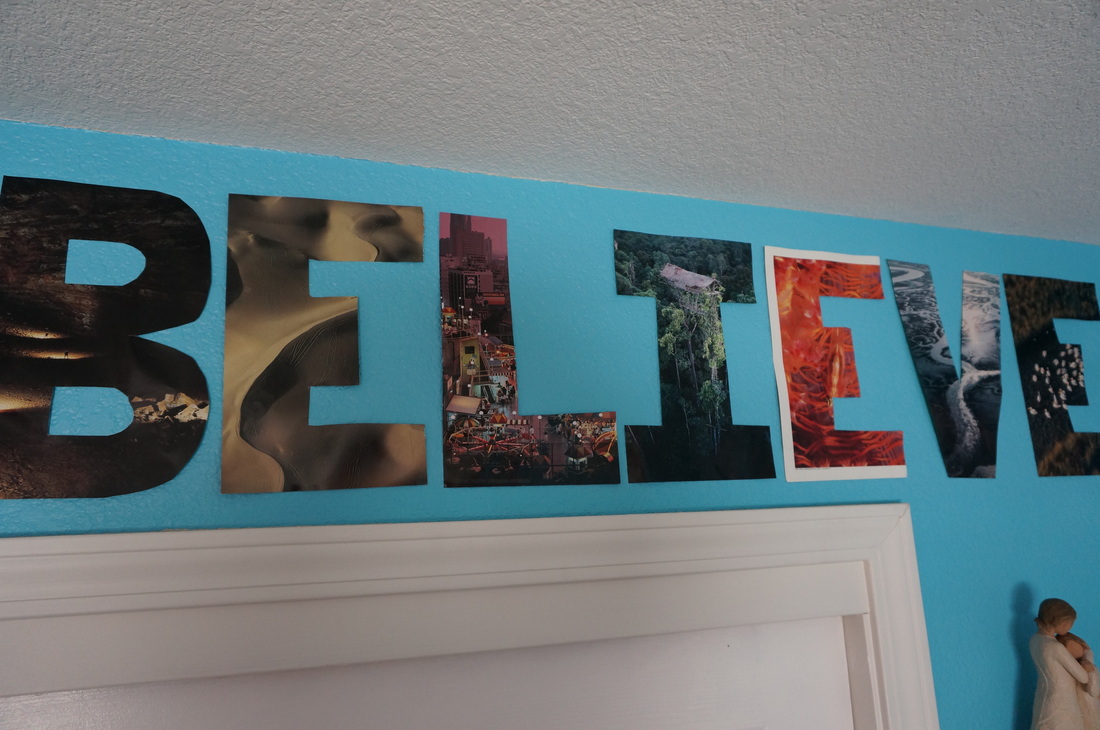 I found a hand-calligraphied quote made by my daughter in her art portfolio, and I hung it up. 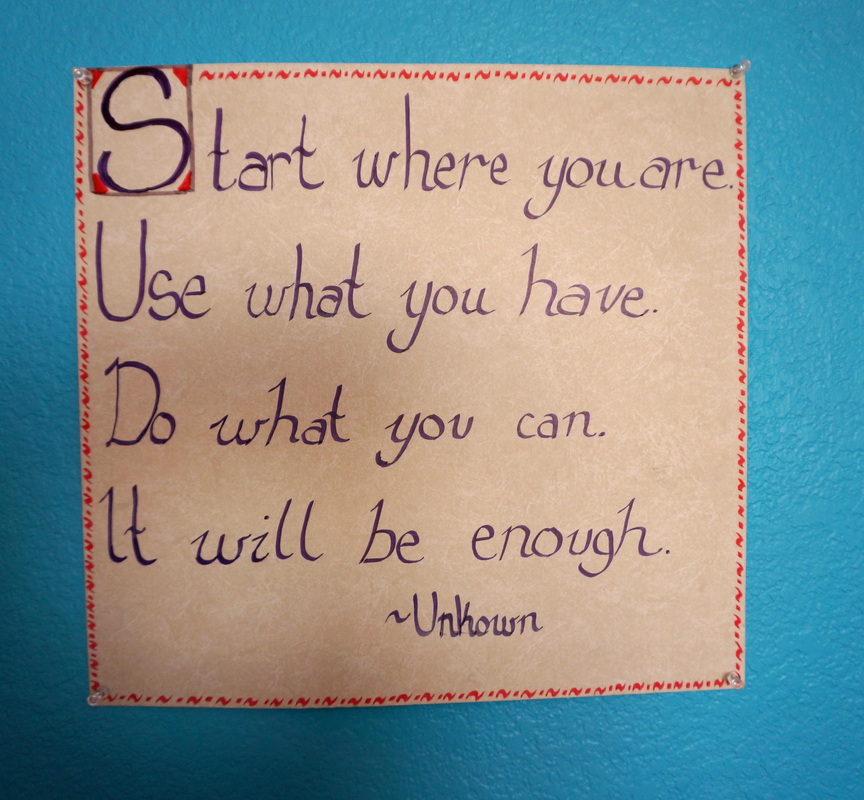 I found these two prints at Home Goods, and because they matched the room colors I bought them and hung them up. 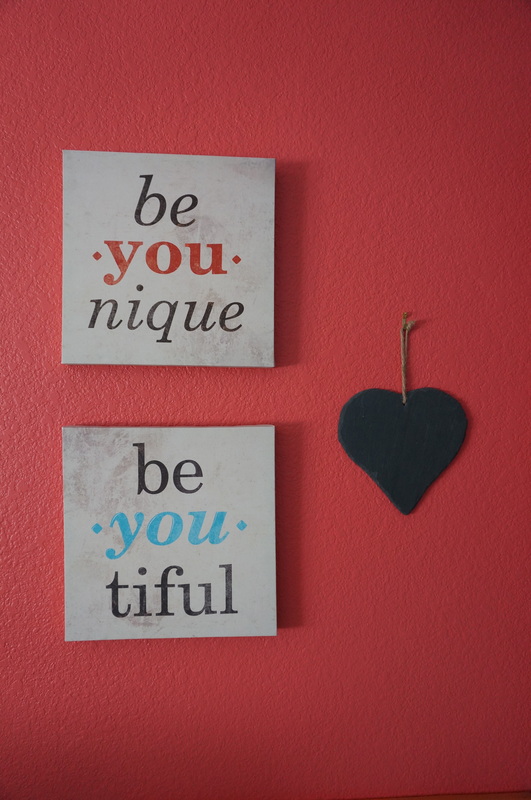 I also bought the turquoise pillow and the small white shelves from Target.  All in all it was a really inexpensive transformation.  Which was a good thing! Especially since neither one liked my handiwork. They have been kind, and they have tolerated the large sparkly quote.  But for both of them, it feels too young.  I agree.  I keep waiting for them to take it down, but I think they don’t want to hurt my feelings. I have a new idea for their wall……

The words will come down soon.  But this time they will help.

The two wall colors of this room are Jamaican Sea by BEHR and Coral Expression by BEHR.  I used the self-priming interior eggshell finish. 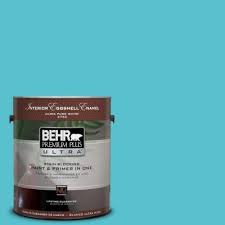 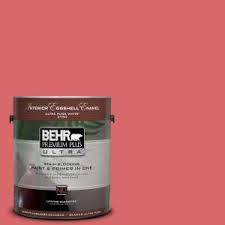 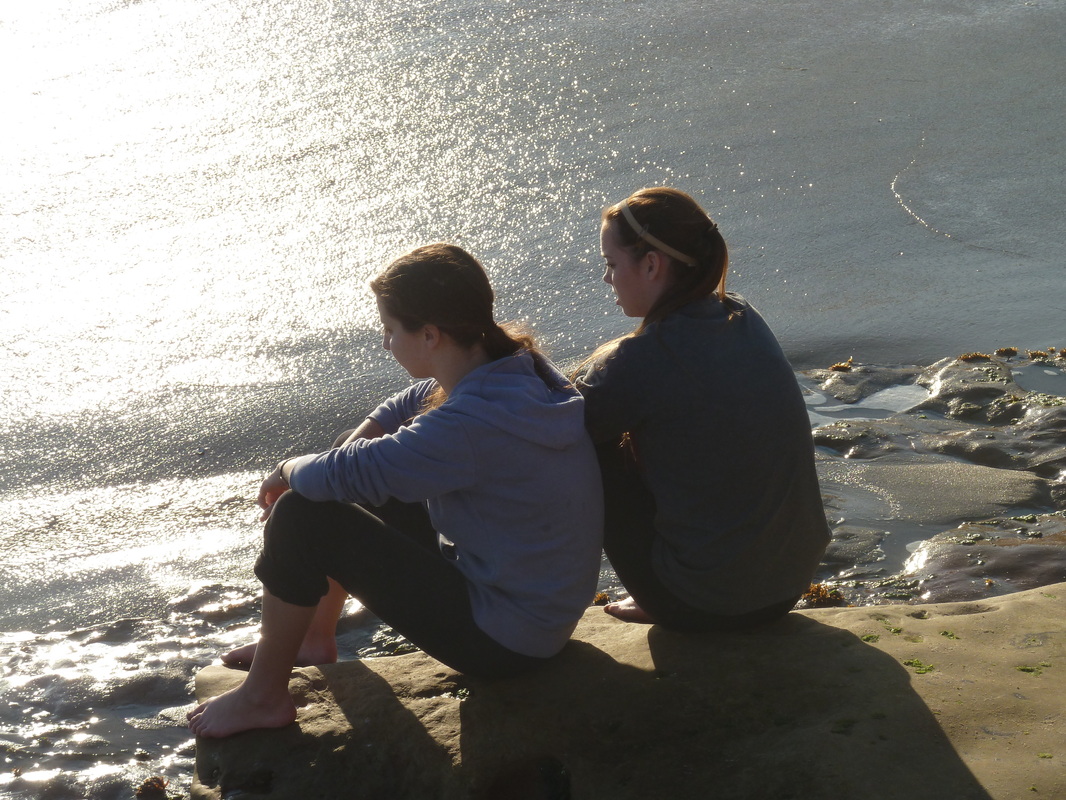 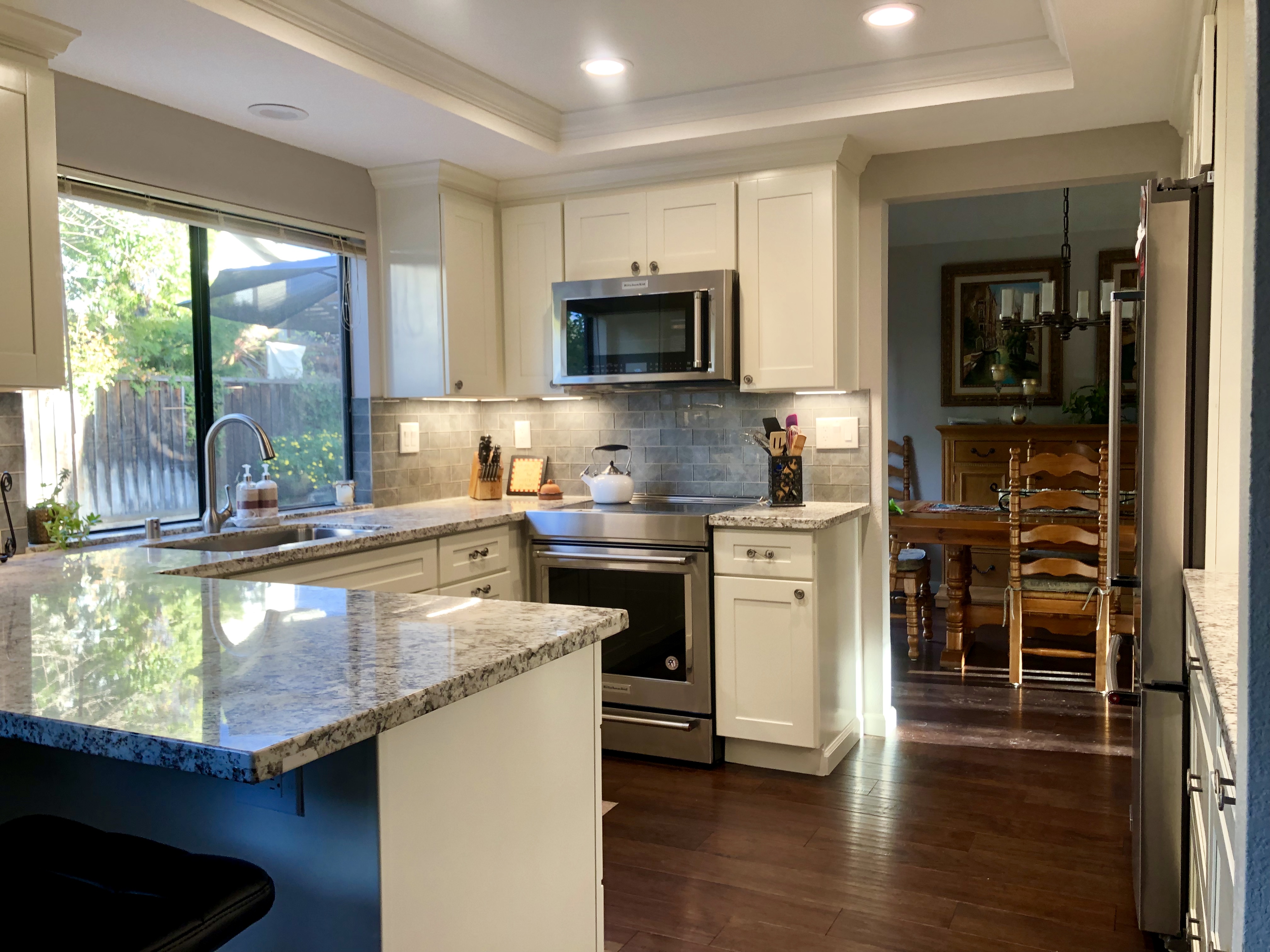 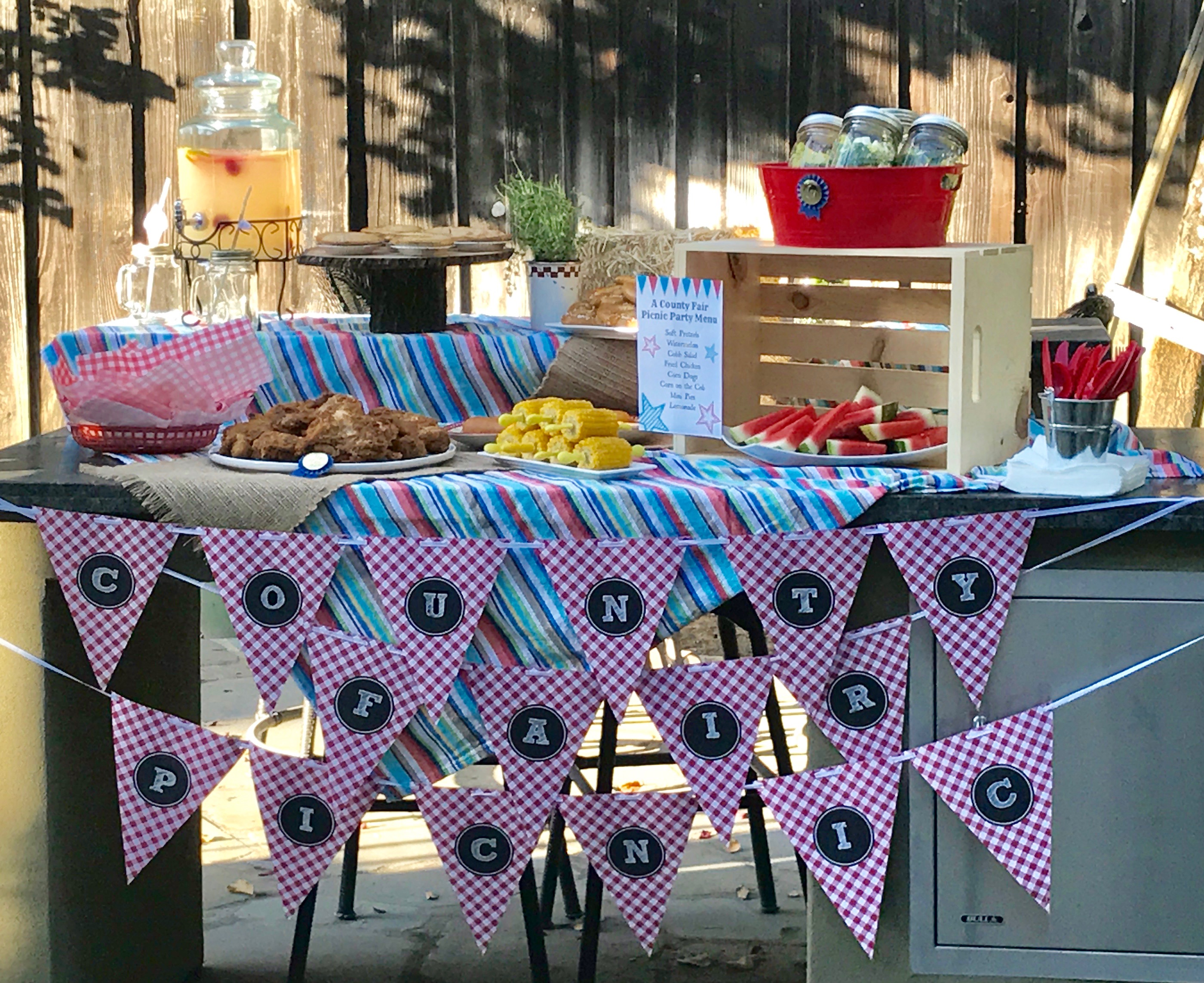