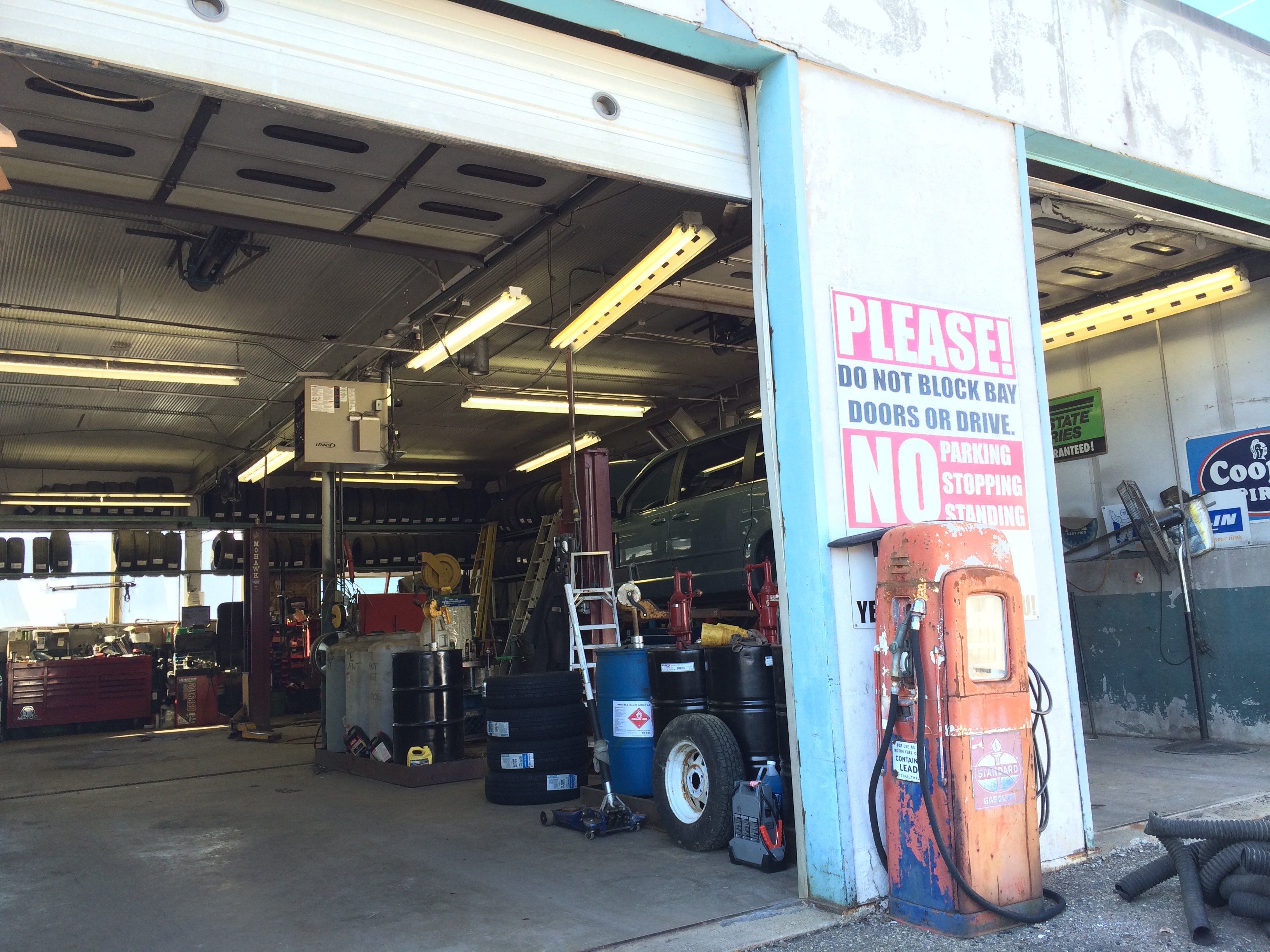 We both slept great at America’s Best Value Inn and Suites, despite the lingering scent of stale cigarette smoke. We got our morning coffee and oatmeal at Starbuck’s right across the street while I posted yesterday’s blog. I loved listening to the good-natured ribbing of so many Michigan logo-wearing customers as they chatted with each other while I typed.

Once we got in the car ready to hit the road it was 8:30. As I said, not too bad, just 30 minutes behind schedule. But then we needed gas, and then we needed to find a post office for me to mail the 2 pounds of Good Karma coffee beans to the winner of my give-away. Yes, the coffee has been traveling west with me as I have been meaning to get it into the mail. I realized I should mail it before I crossed the border into Canada. So coffee, gas, post-office, then we will be on the road. Well, low and behold after getting gas the car’s dashboard lit up! An orange Check Engine, A red Anti-Locking Brake symbol with a big slash though it, and a green “Cruise” flashing on and off. Hmmm…. Well I have had a check engine light go on after getting gas once before – probably nothing.  Alyssa drove as I pull out the manual to her new-to-her Subaru. Everything in the manual said that if the lights don’t go off within a few minutes of driving, the car needs to be checked. It was the anti-locking brake light combined with the flashing cruise light that was the most worrisome.

So I start calling for help.  First I called the Subaru dealership in Ann Arbor. Despite my story of needing to get to Vermont by Friday night, the best they could offer is that maybe, just maybe, they may be able to squeeze me in during the late afternoon. Well that won’t work. At home I take my cars to the small independent car service companies. I love both Fred’s Automotive and Monterey Automotive. I completely trust those two outfits, and they both have served me well over the years. So we need to find an independent car servicing company.  So we turned to Google and the power of the smart phone. Alyssa found her first choice to call Side Street Garage based on their excellent reviews.

So I called, “Hello, my name is Stacey and my daughter and I are traveling cross-country from California to Vermont and the check engine light along with other lights just came on.  I’m not sure if it is anything to worry about, but I would like to have it looked at to make sure that we are ok before we continue traveling on.  Would someone be able to look at it quickly?”

“Oh sure, come on over. When you pull up, just pull up to the window and don’t’ block the doors. 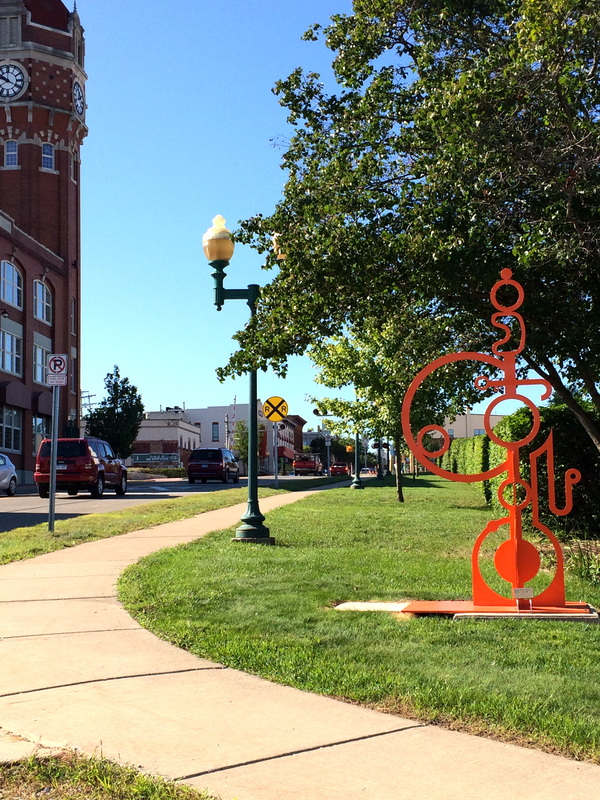 Yea! Well we were only a few minutes away, and we were soon driving through the tree-lined streets of Chelsea, Michigan.  The quaint downtown was filled with inviting shops, colorful flowers, and tall brick buildings. We easily found Side Street Garage. 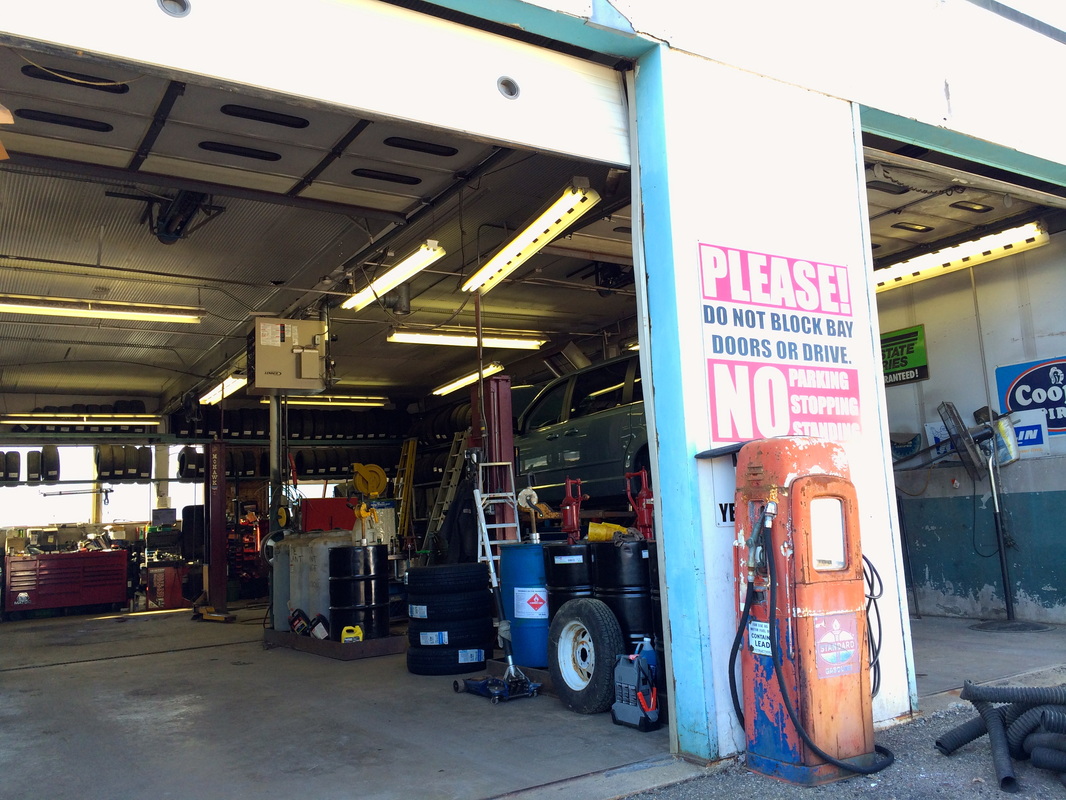 Bobbie who greeted us in the front office was as warm and friendly in person as she was on the phone. She chatted with us as she had Dan scan the car’s computer to make sure everything was OK.  The lights had just gone off just as we turned into the shop, but Dan checked it out anyways.  While he scanned the car I chatted with Bobbie about our trip cross-county and about the town of Chelsea.Chelsea is the hometown of both Jiffy Baking mixes and Jeff Daniels!  We drove past the Jiffy Plant – it’s on the street right before Side Street, but we had no idea about Jeff Daniels.  Jeff has started a community theater production company called Purple Rose Theater Company.  Looking at some of the theater bills that I later saw in the coffee shop, they put on some amazing shows. 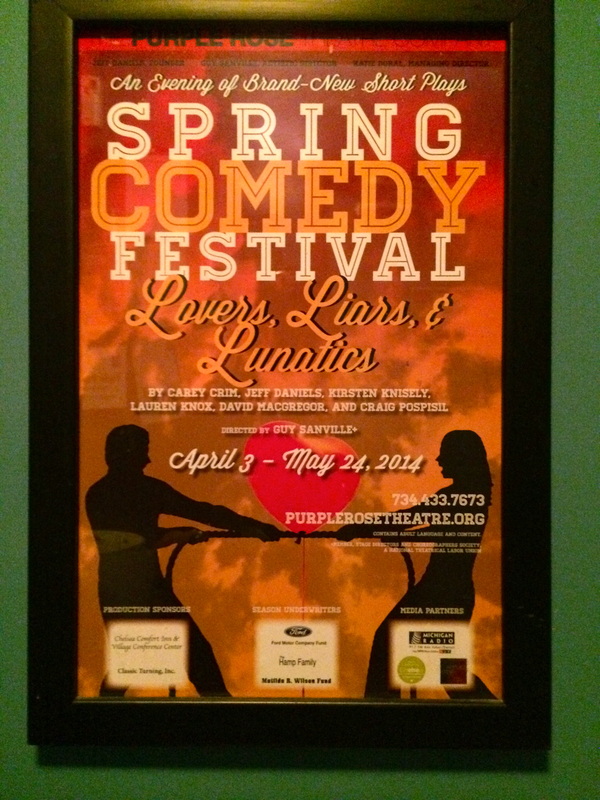 Well, Bobby and her crew really helped us out and we got back on the road. We stopped for a bran muffin and cranberry scone at the downtown coffee shop, ZouZous Café and Coffee Bar.  It was now 10:00 a.m., but thankful to Side Street Garage in Chelsea, Michigan, we knew we were safe to drive onto Montreal. 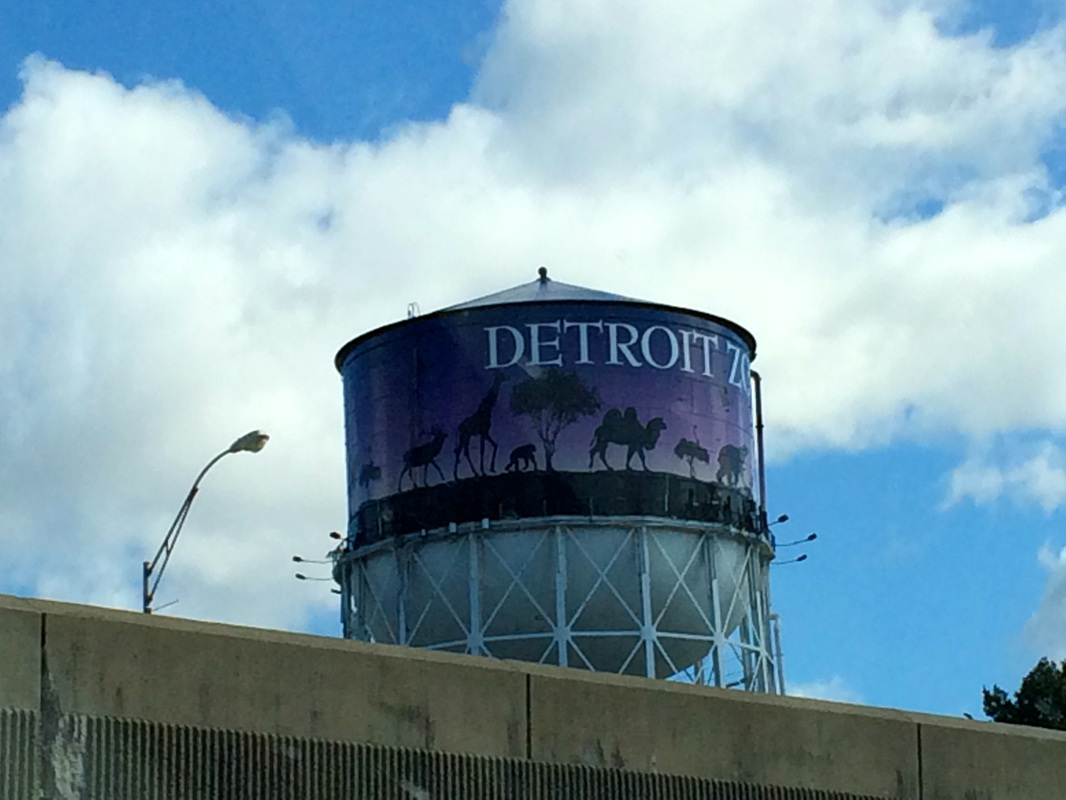 And we made our way into Canada! 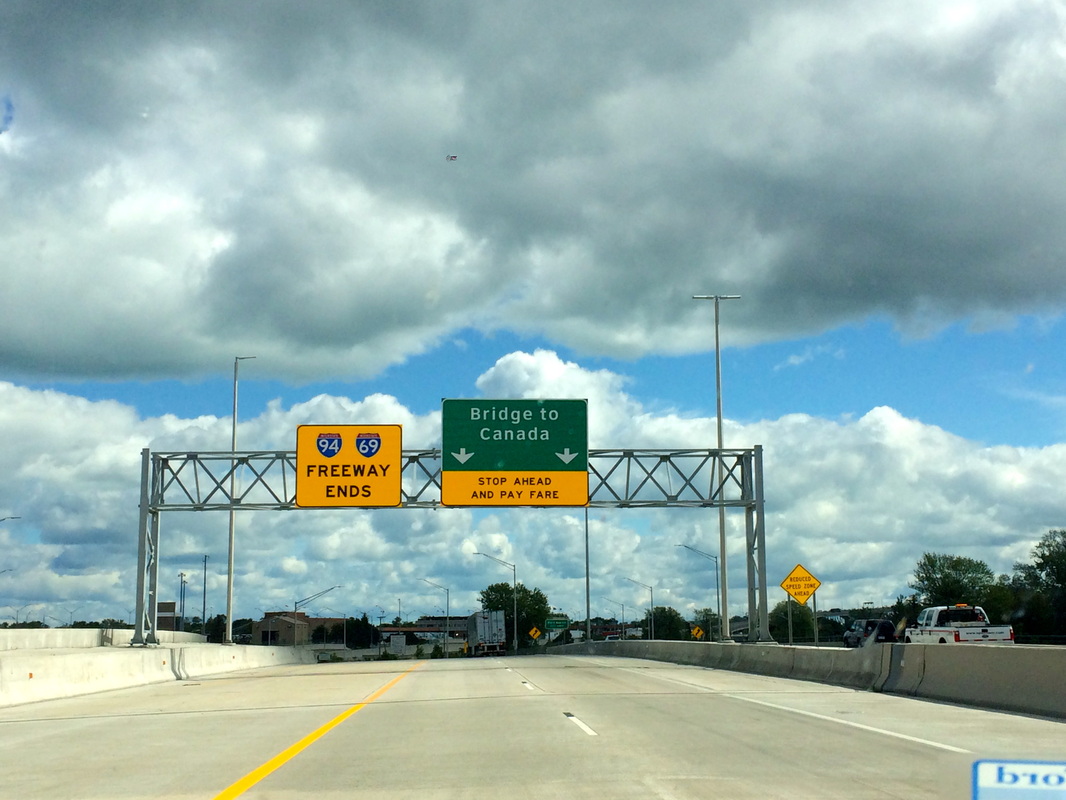 And stopped for gas and food…
Thankfully the rest of the drive – day and into night was uneventful. Tons of road construction and an hour detour driving through Toronto (an unplanned hour – I might add) we were finally welcomed the city lights of Montreal.

Finding the right Marriott was a bit tricky, as was navigating city streets where all the signage was in French.  We were so excited to see a tall city building with the bright red Marriott that it became our beacon in the sea of downtown Montreal.  As we pulled up we realized that this was not our Marriott, we needed the Marriott Courtyard just a few blocks away.  So back into the car circling the many one-way streets until we were able to pull up front of the Marriott Courtyard.  They front desk and lobby employees were most welcoming and we were in our hotel room for the night at 11:00 p.m.Our last long day of driving! 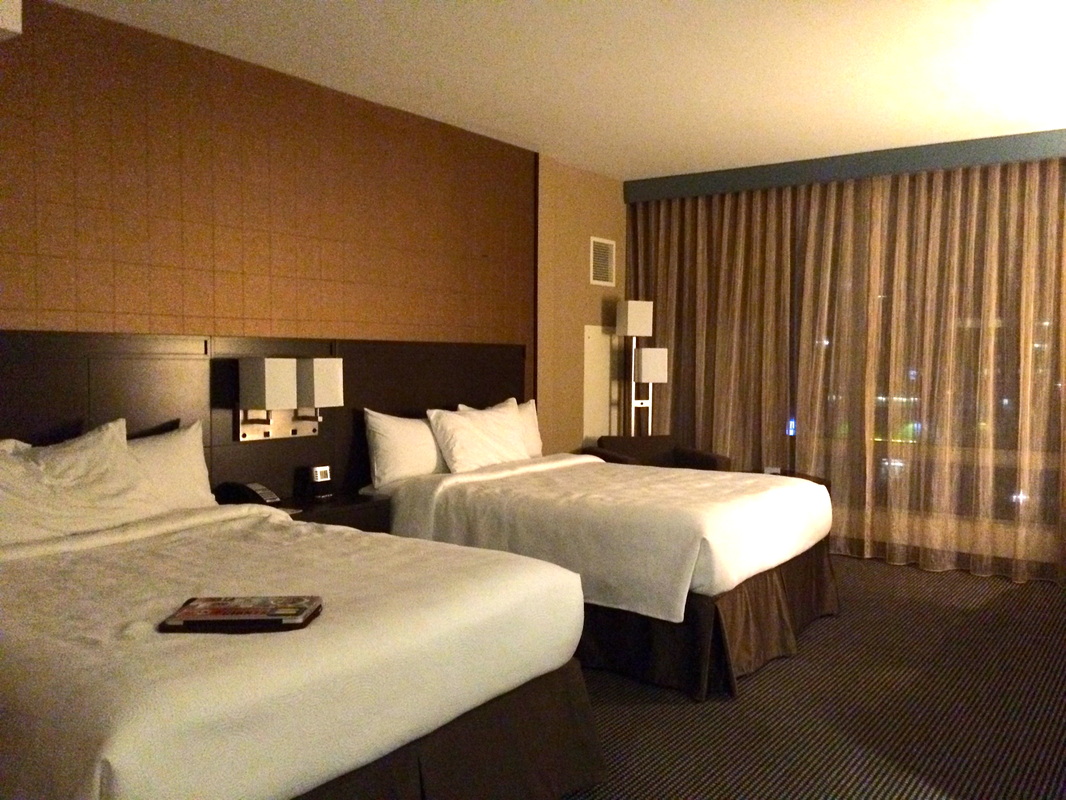 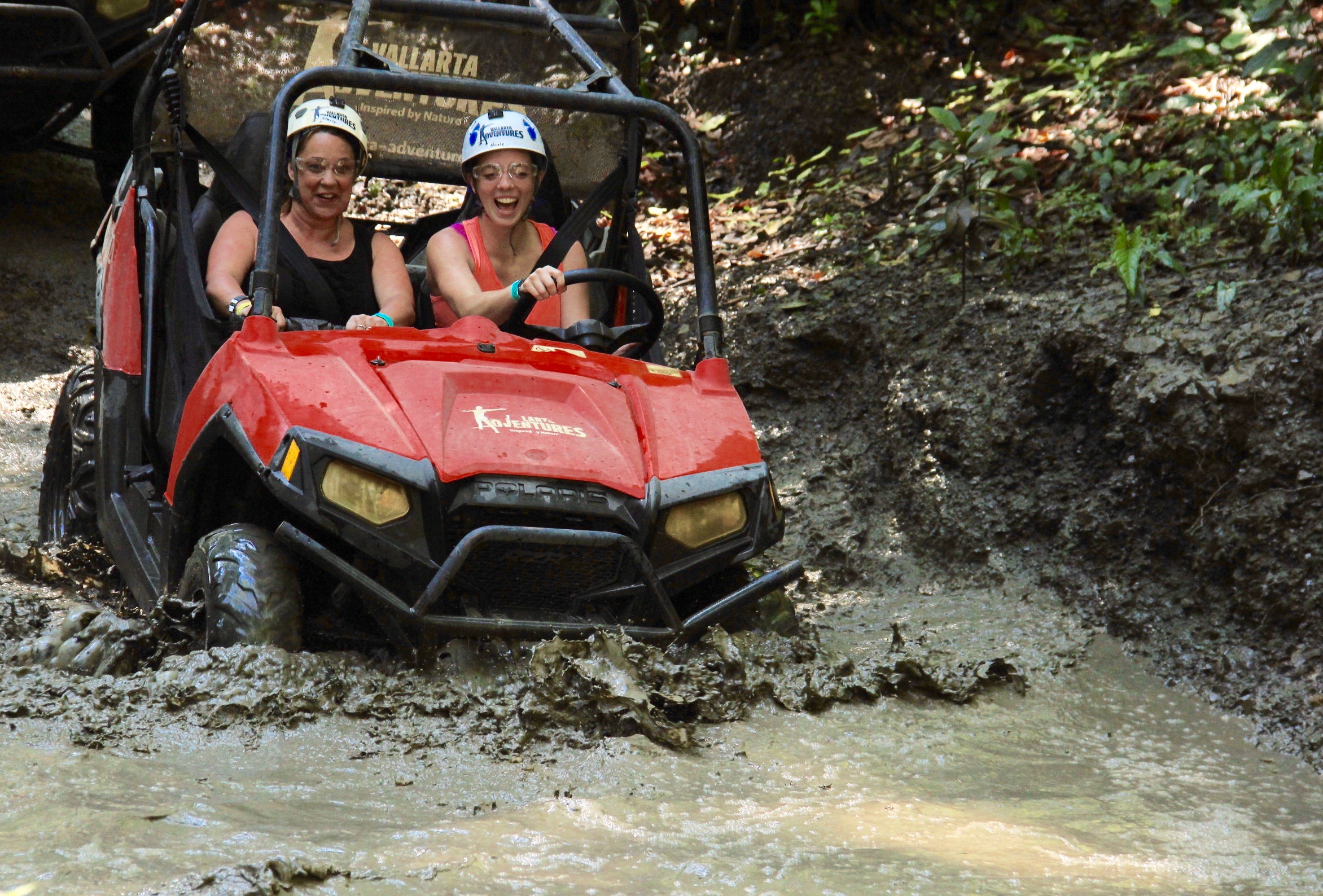 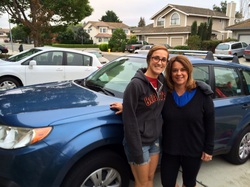 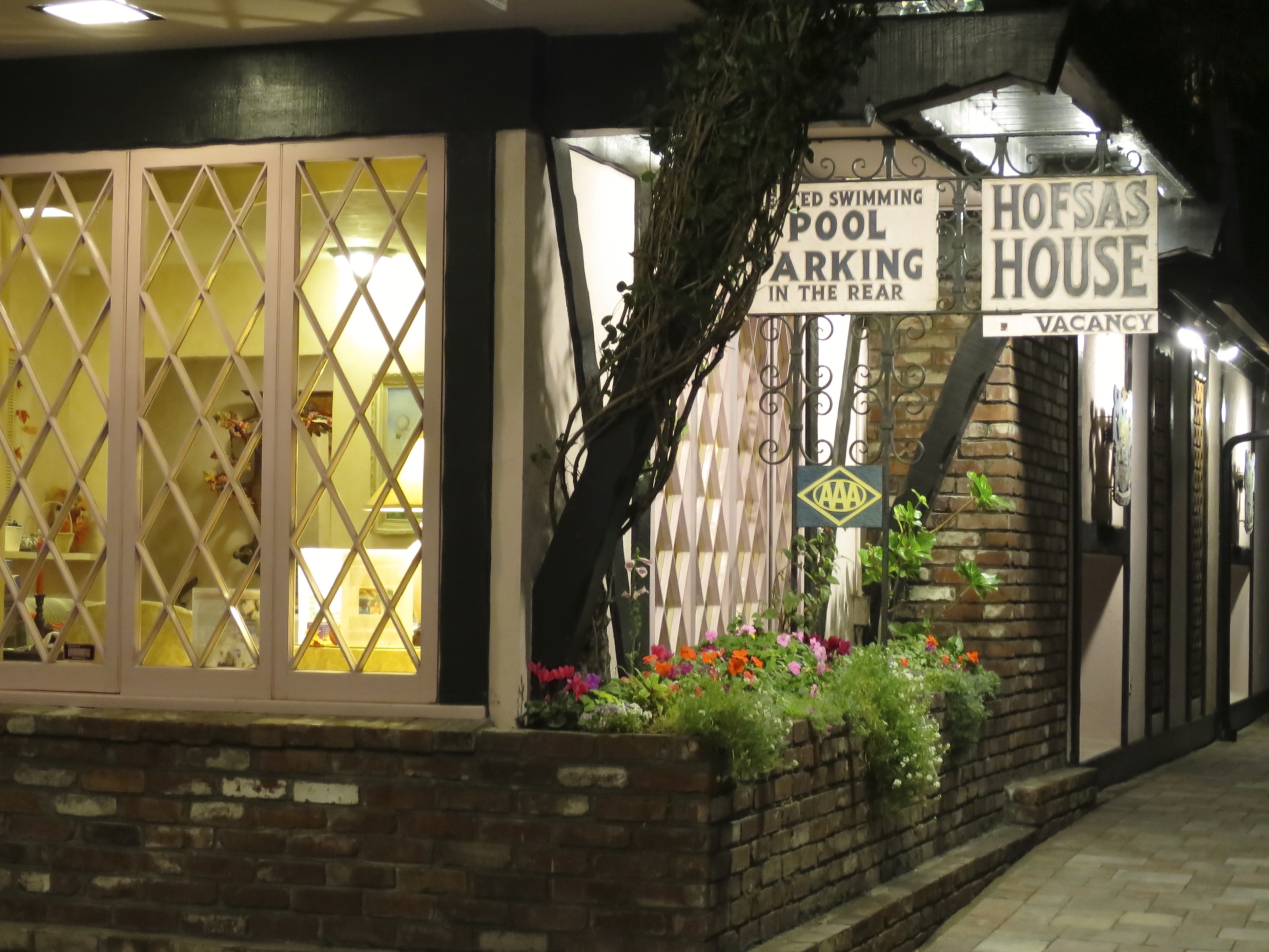